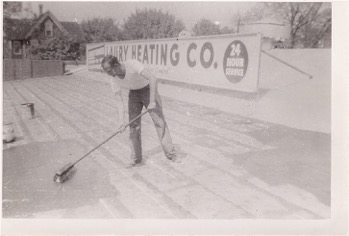 Sophisticated protective coatings development appeared to have begun in the latter half of the 17th century when a German chemist found a way to use the stickiness of coal tar as a protective coating on woods and ropes. During the 19th and early 20th centuries, scientists developed a variety of organic, inorganic and synthetic materials for use in coatings, binders and solvents. The most dramatic coating properties advancement happened with the development of polymers.

During the mid-19th century, a new type of roofing was created by soaking rag felt in either pine or coal tar, layering the felts with layers of hot tar, then covering the assembly with gravel. The tar was replaced by asphalt and the rag felt with fiberglass mat to create the modern Built-Up Roof (BUR). For the better part of a century, if a low-slope roof was called for, the hot-applied Built-Up Roof was the only choice (source). 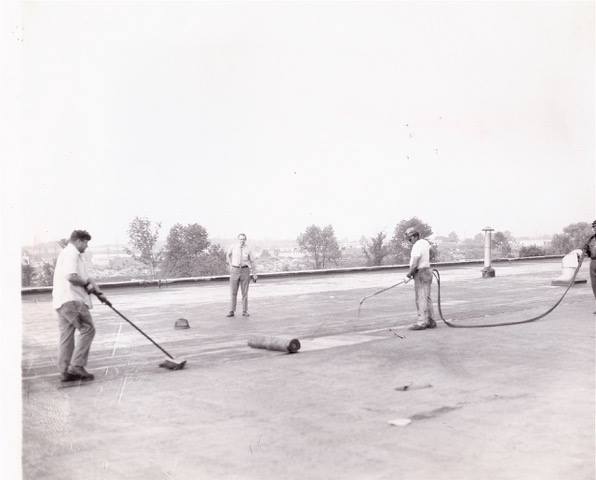 In the 1960’s four different varieties of products were introduced.

In the sake of progress, companies developed variations of the BUR concept with different products as the layers and then finally a single sheet combined with elastomeric polymers and bitumen to create a modified sheet (modified bitumen) that would be torched and mopped with asphalt, cold adhesive products or self-adhered.

Along with the modified bitumen came rubber and thermoplastic membranes. The polymerized rubber of EPDM and the two major types of thermoplastics used in roofing: polyvinyl chloride (PVC) and thermoplastic olefin (TPO), and lastly Fluid applied reinforced roof coatings (FARR). 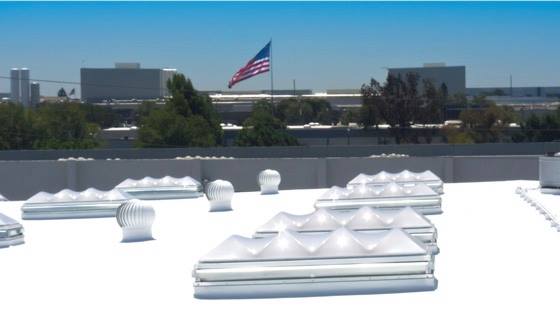 Asphalt roofs became popular due to its ability to lightly melt and reseal itself to the membranes and its penetrations. Since the hot asphalt is mopped on and flooded on a roof it is almost creating a monolithic surface. It was a good roof, but hazardous. In addition, Petroleum products are less viable today.

The tear resistance and flexibility of Modified Bitumen was highly used, but still requires the installation of a petroleum product with a torch or mop. TPO’s reflective surface and energy efficiency was also popular, but TPO membrane is less resistant to chemicals and is prone to cracking.

PVC has the durability and resistance to chemical damage and is somewhat resistant to punctures or weathering. It is also installed with a Ballasted, heat welded, chemical adhesive or mechanically fastened system. With that you still get Seams.

EPDM has earned a reputation for weather-ability, hail resistance and flexibility. In most cases the roof has a black surface and is adhered with chemical adhesives. We lose the cool roof properties with the dark surface.

Most roofs that have rolled membranes, leak around the seams, penetrations and ponding water areas. The roof surfaces deteriorate because of extreme weather conditions, often cracking or oxidizing. There is a greater possibility of a leak with a seam from expansion and contraction with rolled membraned products. Solar reflectivity can be achieved with PVC and TPO products, but you’ll have seams and patchwork around the penetrations. There’s also deterioration with most products with ponding water.

What We Love About a FARR Roof Coating System

Fluid applied reinforced roofing is the culmination of the best parts of today’s roofing products.

What roofers need is a roofing product with no seams to fail. They also want the security of a monolithic membrane sealing penetrations, the ease of installation without rock ballast, harsh chemicals, or screws and plates penetrating the roof membrane, as well as an energy efficient, durable roof. Western Colloid’s pioneering products provide that.

If you currently have a failing BUR, Modified Bitumen, EPDM, TPO or PVC roof, they can all be reconditioned with Western Colloid’s fluid applied system.

It’s not a fluke that every major PVC, TPO and modified roofing manufacturer are introducing a liquid applied option. Liquid/Fluid Applied Roof Systems are the way of the future.

At Western Colloid we are committed to producing systems that are environmentally friendly and energy efficient. Our products and systems have the classifications and approvals that you require and the warranties that you need. Furthermore, we are committed to reducing landfill use by indefinitely extending the life of existing roof systems.

TOP 7 ROOF PROBLEMS AND HOW TO PERMANENTLY SOLVE THEM